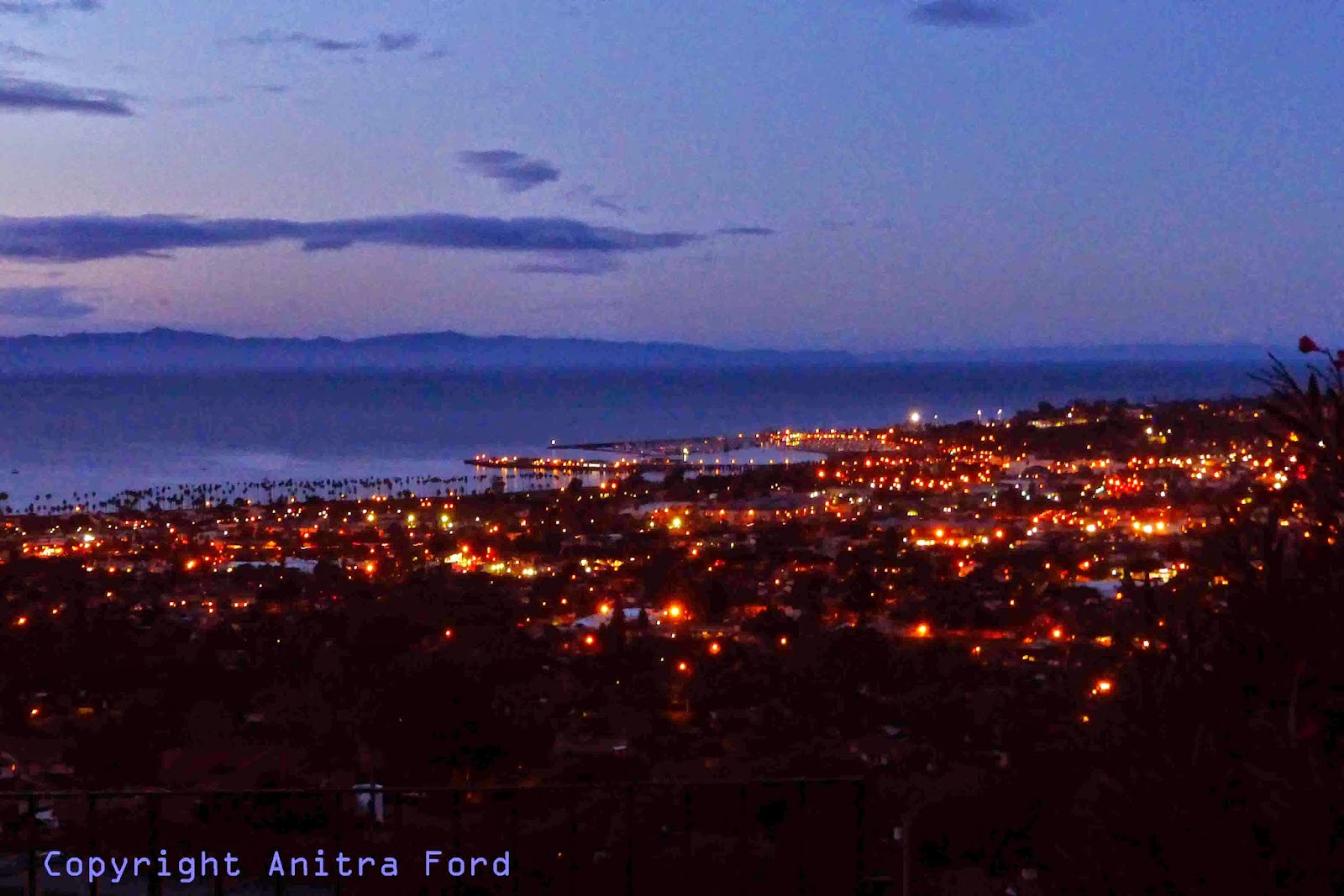 When I arrive on this hill above Santa Barbara, the lights of the city are still glowing in the half-dark. On one side, I see the city and the harbor, on the other, the curving coastline with an ocean silvered by the morning sky. I sit in my car and watch the unfolding.

The mountains silhouetted against the first tinge of dawn, rise, ripple and fall like frozen waves. At this early hour, I'm betting on color: color, shape and some luminous image only appearing once. Something memorable like last night's rain whooshing, shushing and pelting the walls of the house -- the first real precipitation we've seen in six months.

And there they are, pink clouds hovering above Santa Cruz Island 25 miles out. Its broad presence stretched wide across the channel like a snoozing iguana. And now, the ocean too is reflecting mauve: creamy pink enveloping the harbor and sliding into slips like shiny fingers. 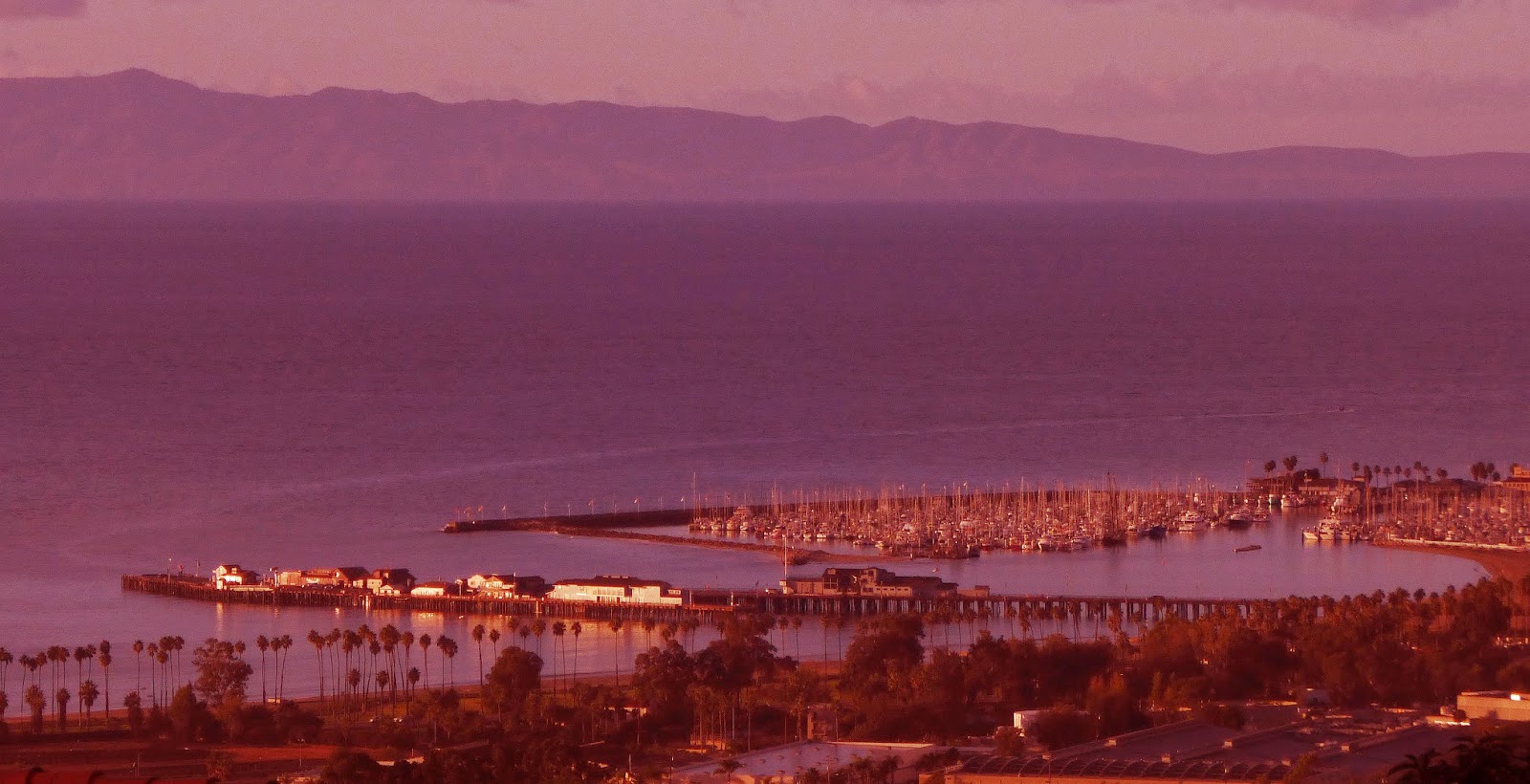 Stillness hovers and morning seems to be holding its breath. In the quiet, it appears nothing is out there in the shrubbery of the canyon. But this is the home of coyotes, and moments ago, when I climbed the hill in dim light to capture a view of the cove, I thought of them, the coyotes in a pack -- and me (still in my sleep sweatshirt), not even as large as a full-grown deer. I kept snapping photos, but then opted to quick-step back down the hill and get into my car. 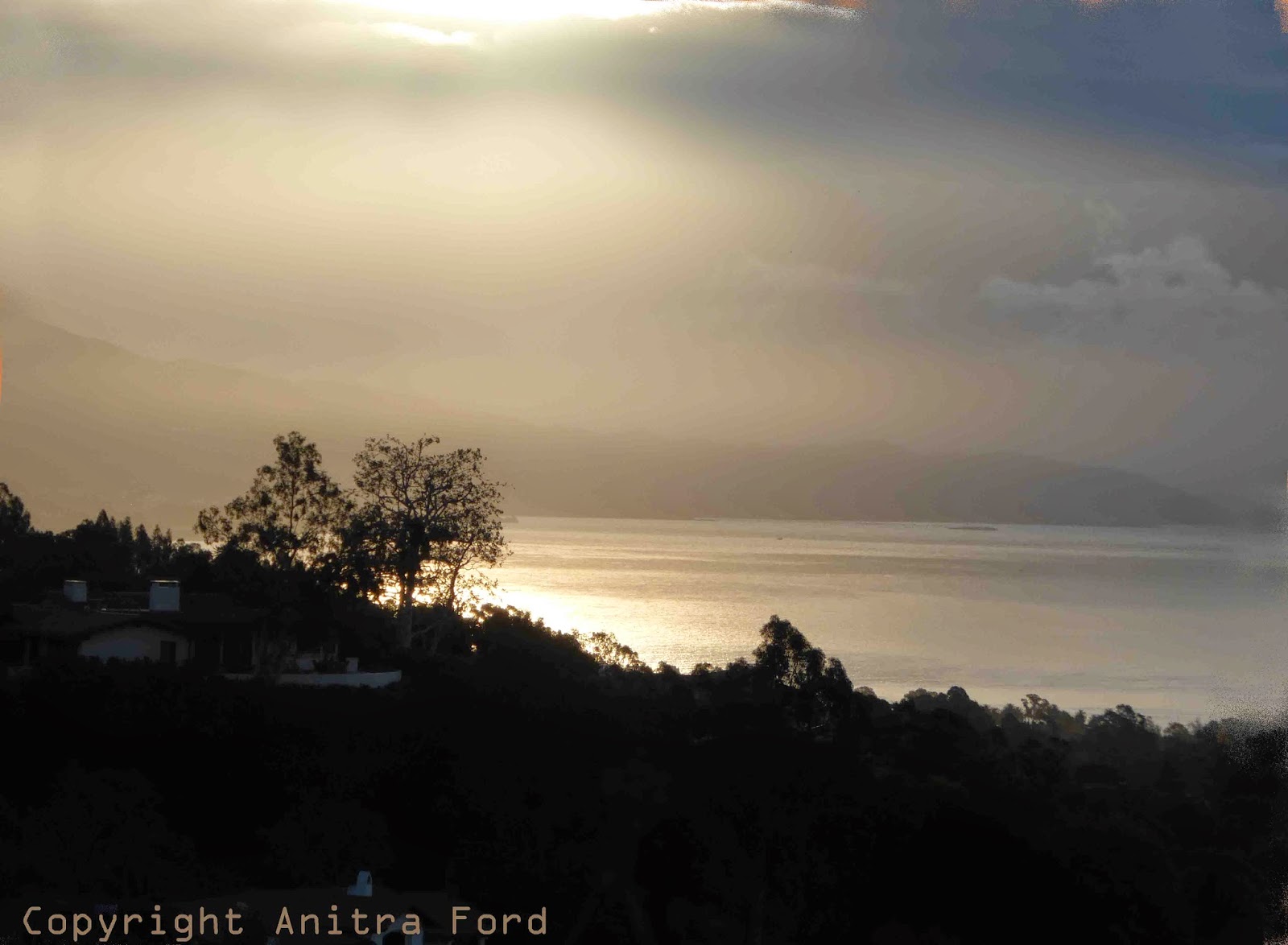 The views everywhere, even from behind my windshield suffice. But I'll go out again, just stay close to the door of my car until dawn grows brighter. 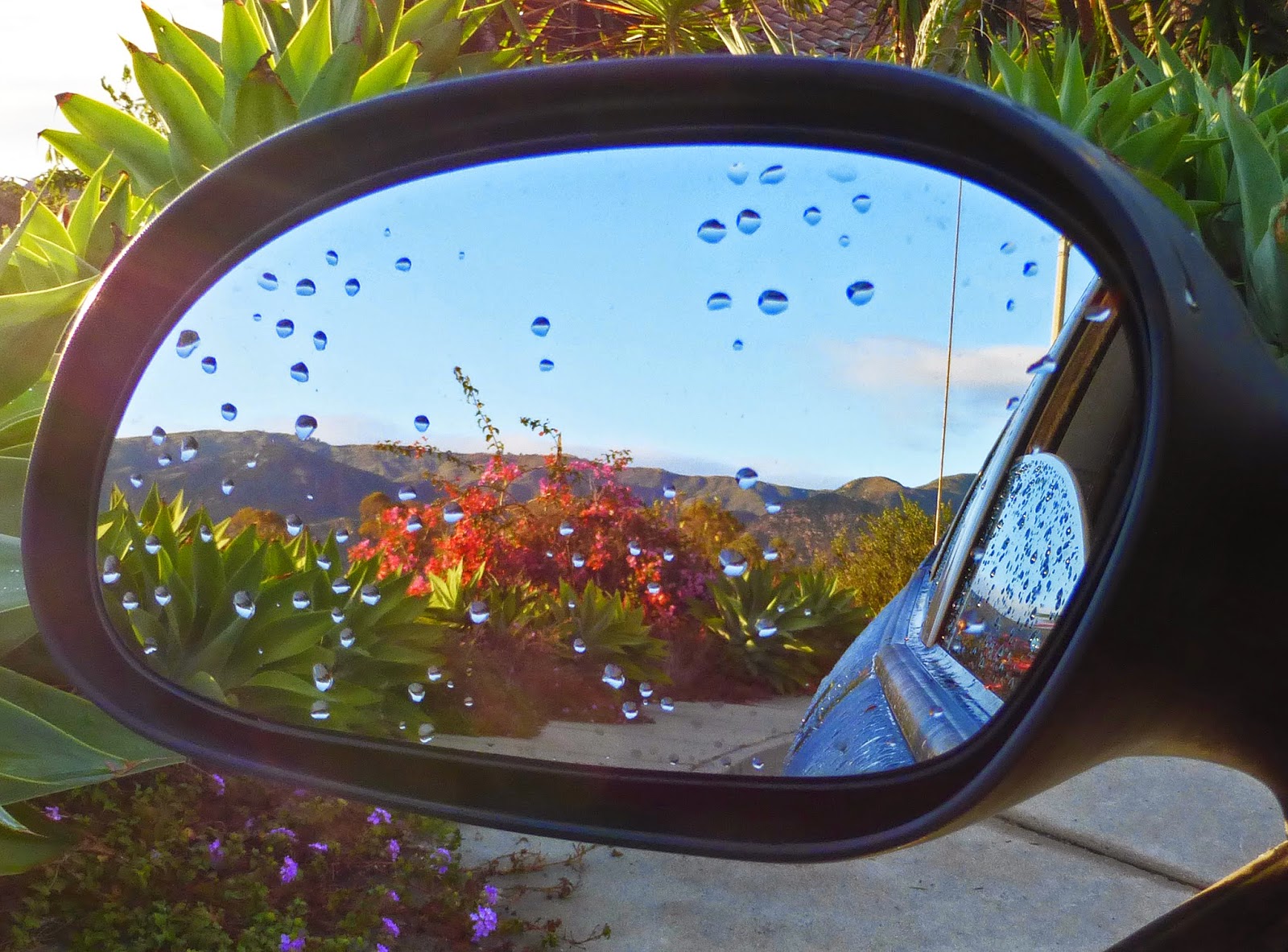 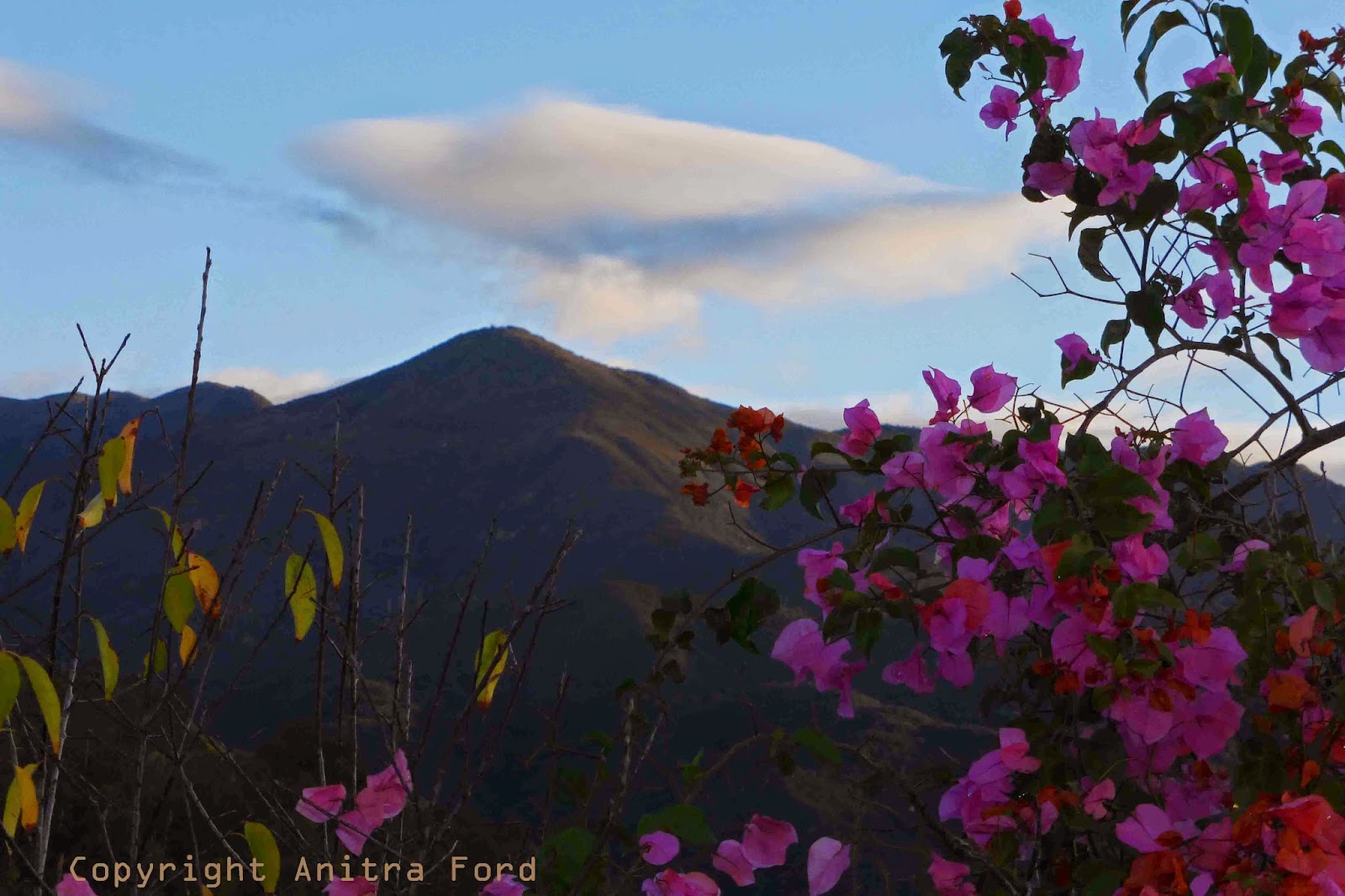 Hal's house on the edge of the canyon, with its spectacular view of the city and the ocean -- was sold. Hal, a gregarious fellow, would, when he saw a photographer taking photos through the open space between his garage and house, greet you in the street. He loved to talk about how he came to purchase this property considered a risky location years ago. And then, he'd invite you onto his deck with its unobstructed vista and say, "Be my guest. Take as many photos as you'd like, and please, come back anytime."

Where Hal is, I can;t say. I'd guess at Val Verde retirement village at the edge of the city, a community nestled behind the hills of Hope Ranch and closed off from ocean views. I could tell immediately that Hal was gone. New hedges had been planted, tall ones, designed to block views from the street, and to discourage any artist or interloper with a hankering for beauty. 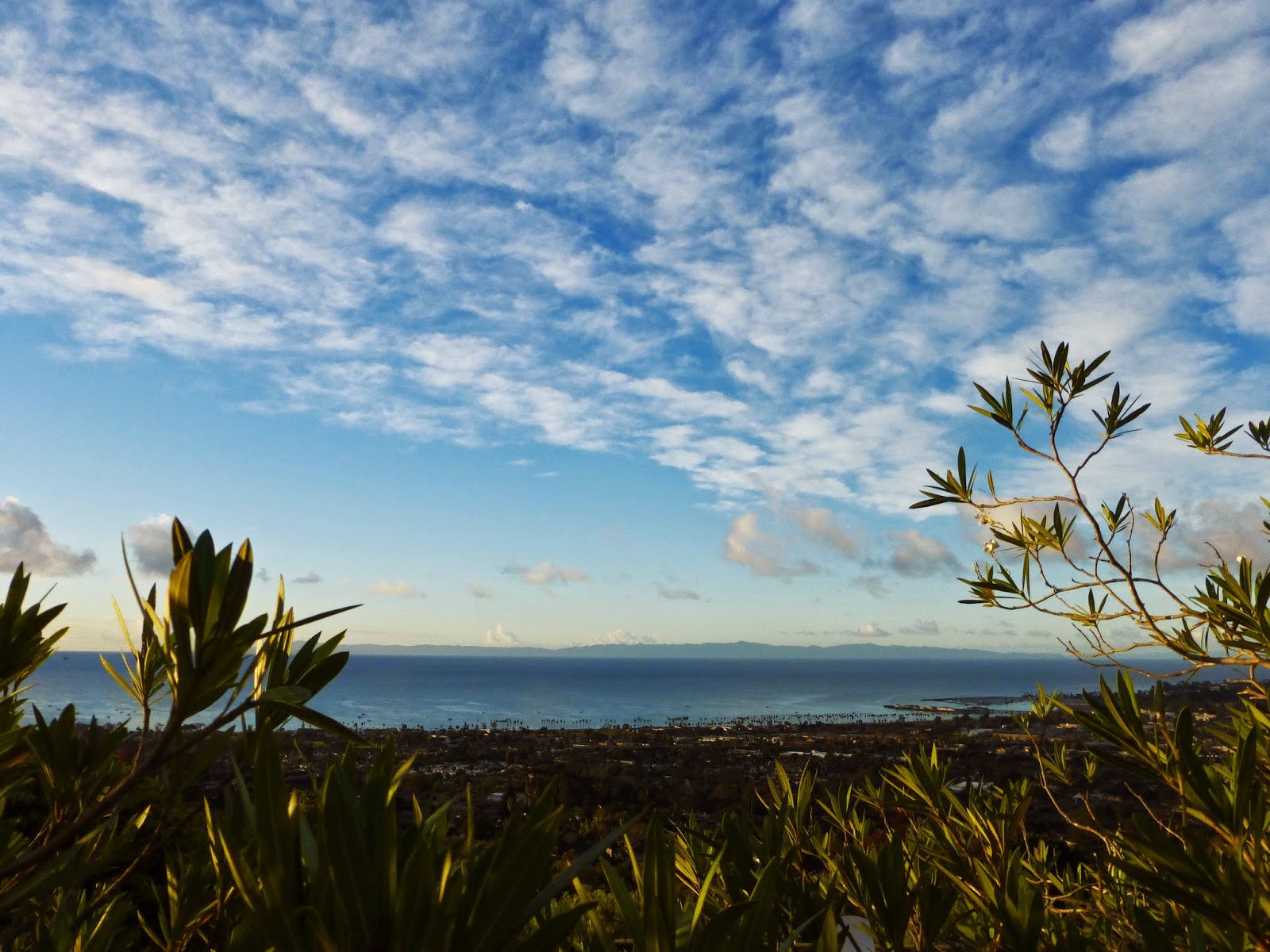 "This is mine dammit! I paid 3 mil for this crib. You don't deserve it, get out of my hair, get off my shoulder!" It took no special skill to sniff out the difference between this new John Doe and the old tar Hal.

While taking photos with John Doe's new hedges sprouting into my picture, the new growth appeared like vines of barbed wire. I thought of the Bruno Mars song, "Locked out of Heaven," and the random words: A prison inside out. 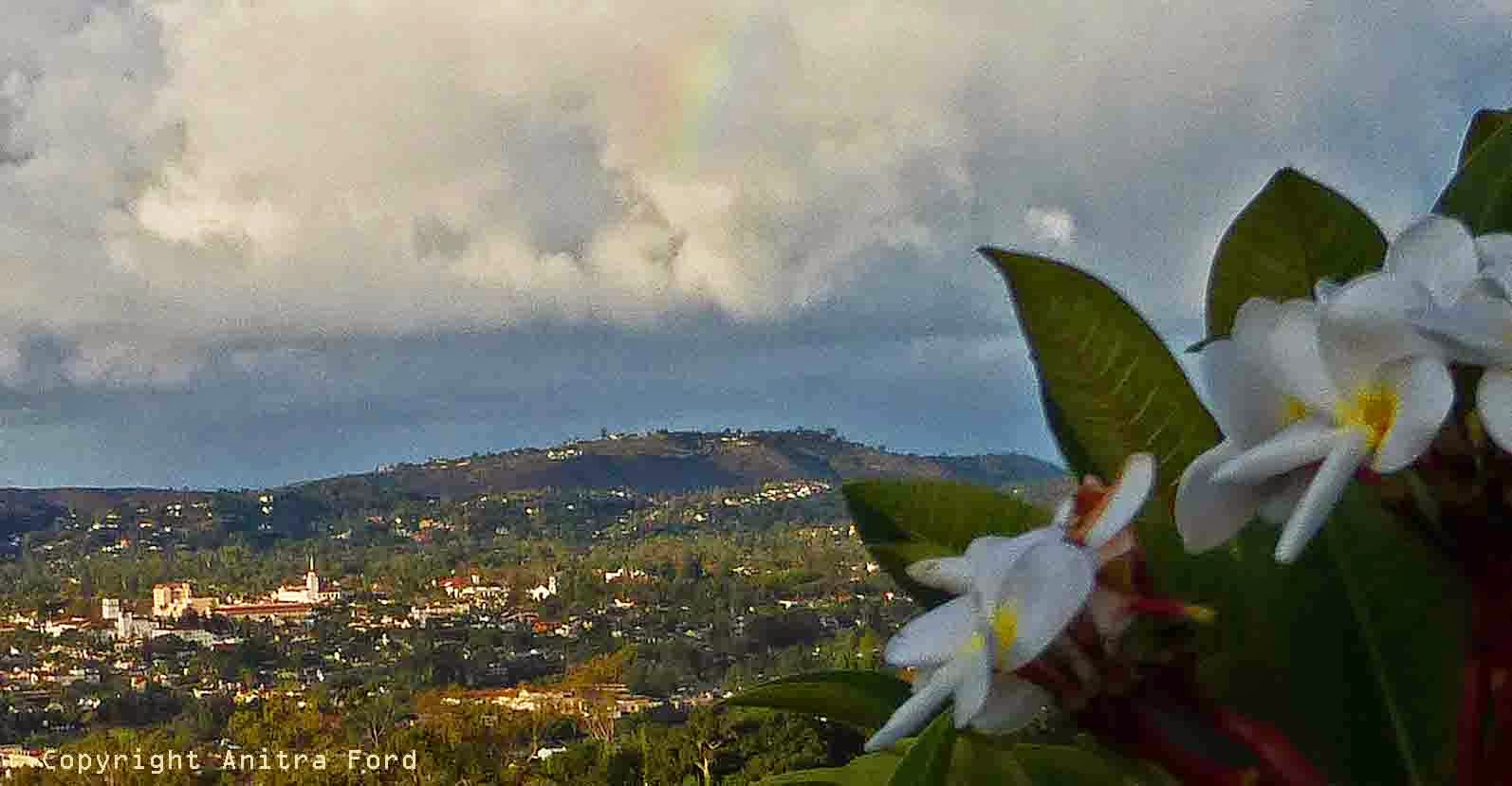 Scouting new angles for when the view through Hal's house is completely obscured, I went into the street and climbed higher onto the hill, losing my view of the ocean, but finding a fetching scene of the city. As I snapped my photos from this new vantage point, I had to blink and look more than twice at what had manifested. Across the city to the west, in the sky above Ellings Park -- surprise! A rainbow shooting through a cloud. 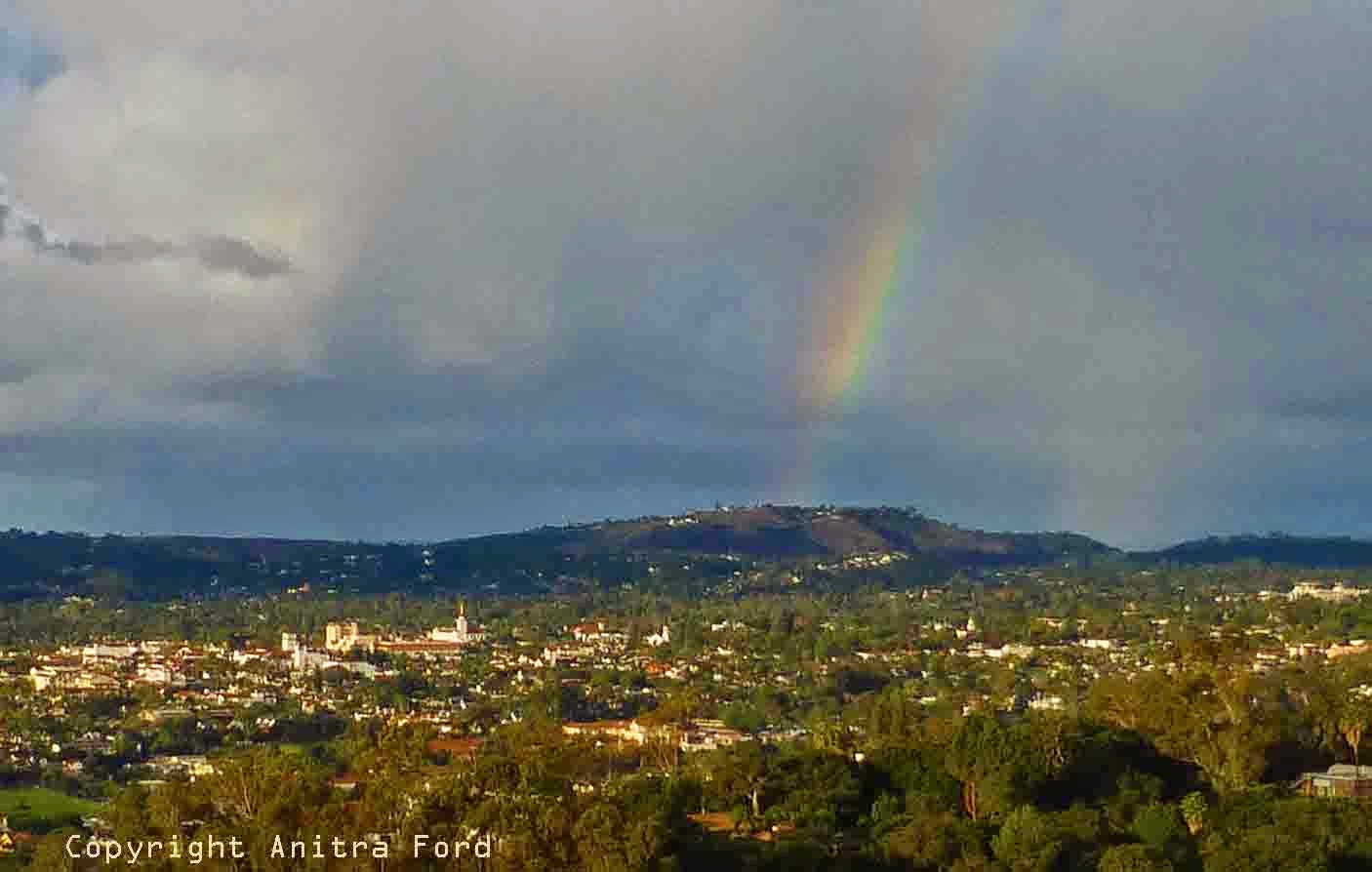 Hello Dear Viewers, welcome back. It's great to see you here again. I plan to stay with this every-other month schedule. That means I will return after the New Year -- 2015, yep, really. It's a date: January 15th. Until then, sunny skies, warm breezes and a heart-filled holiday season.

PS: Click on the photos for fuller panoramic views.
Posted by anitra at 8:06 AM 14 comments: