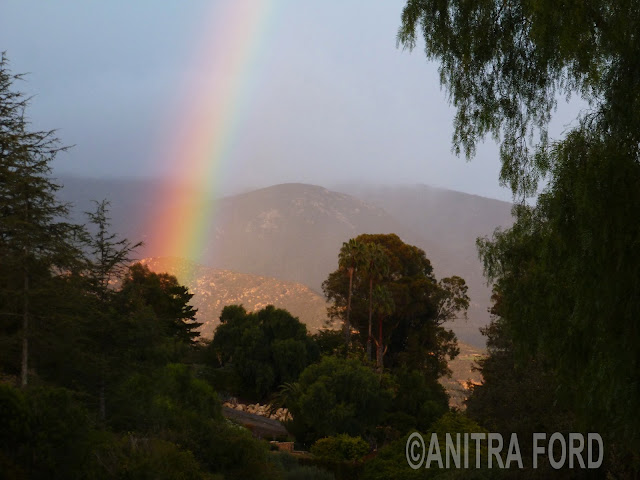 [[Before I enter a two-month break, that will bring me back here on March 15th, I want to share a few impressions that I found along the way this winter. For more information on the status of this blog, read my entry one post below, entitled, "Back from the Blue."]]

Surely I have thought of you this winter, when the season brought early rain, and with it, rainbows christening the hills, Cold air cut through the coastal haze to deliver skies and vistas of piercing clarity. At night, the lights from houses in the hills shone gold like hot crystal. 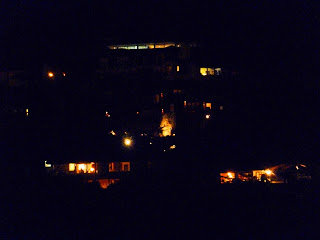 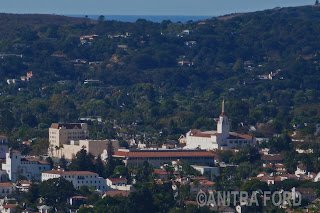 And then, there was Christmas. I spent it in L.A. with my Dear Daughter Erin. Her scene-stealing feline, Charles, the Abyssinian, who's enthralled by the sound of crinkling paper, staked his claim dead-center in the maze of our discards. 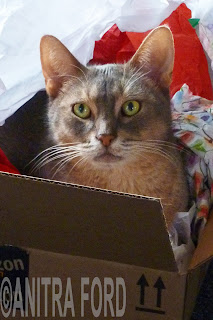 In Beverly Hills, Christmas displays were sparse this year,
but still, we found a few that were dazzling. 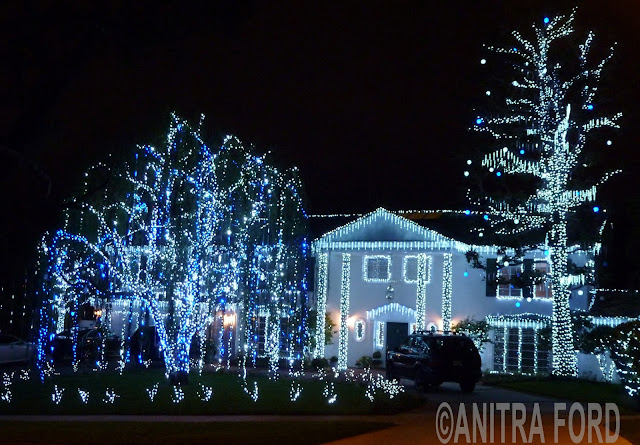 And back here on the South Coast, during my breaks, when I took the time to loll, I caught sight of wintering birds. Small black and white ducks called bufflehead, showed up at the Goleta Slough; and in the park, I spotted cedar waxwings flitting and bobbing from branches of the toyon, while feasting on its red berries. 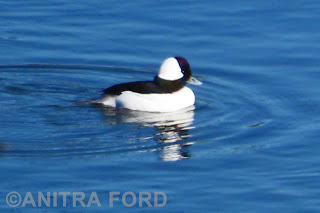 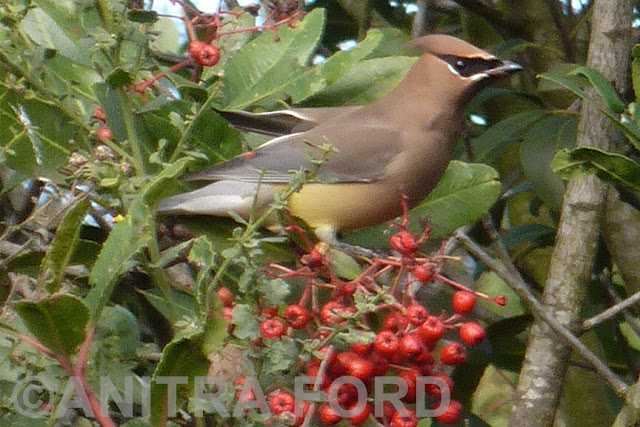 And finally, what would these past three months have been without the regular reward of chocolate? 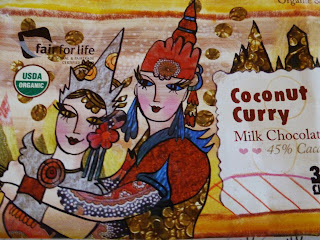 Arrivederci you beautiful people. Until we meet again on 3/15/13 -- Peace, love and happiness, ~ Aneet

Back from the Blue 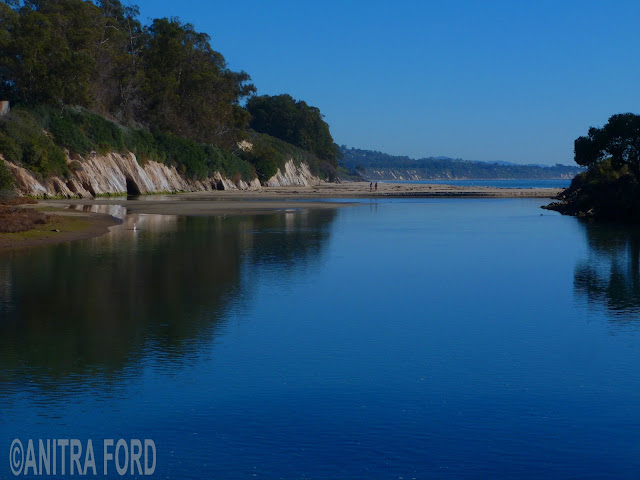 Beneath this wide-angle view of the Goleta Slough, I ponder . . .

What can I say about this blog? That it has been a remarkable accident? Perhaps experiment would be a better word. That I messed around in Blogspot, simply to explore what a blog entailed. I clicked on a couple of icons, and out of curiosity, downloaded a photo. After that, I added a bit of text, and before I knew it, there it was: my first post.

I suppose I could have deleted it, but obviously, that was not the case. Something about what had just happened felt right. Taking photos has been integrated into my life since the Sixties, when I shot mostly black and white, and had a darkroom in my service porch, where I developed film and made prints. Writing began in high school, when my first essays and poems were published in the school paper and the literary magazine.

Usually, I write something, or achieve something after creating a detailed plan and with a strong intention, and then I go about taking the steps (action) to realize my goals. As with all of us, some of my goals are realized, and others never find the light. It's so rare for me to create something without intention, just by bumping into it -- serendipity would be the fitting word -- but that has been the story with "Santa Barbara Sketches." And now, with 115 posts, and more than two years behind me, here I am, and here we are.

At the moment, I'm looking at two factors. One is that my illusive assignment, which I intend to tell you about one day (and hopefully sooner rather than later), is not complete. Not only is it not complete, but it has been expanded. This means that I will (in many ways, regretfully) need to continue with my break. This will bring me (us) to March 15th. The other factor is that this blog feels somewhat complete (at least at this juncture), and I feel disinclined to keep stretching it out into one endless string of posts. Doing that feels messy.

Like a poem or a canvas, there comes a time when a piece or a work is finished. I'm beginning to see this blog as a completed segment, like a book, perhaps the first installment in a series; or a journal of impressions: "Twenty-four Months in the Life of Anitra and Company." I hesitate to set this idea in stone, especially as I will need to be away again for these next three months, and my perception may be very different when I return.

On another note, a number of images have arisen over the past few months, that I'd like to share, but I will need some time to organize them. My plan is to publish some of those photos here, next Tuesday, January 22.

And so, my Dear Readers, now that I have briefly come up for air, like a porpoise from the shell-laden bottom of the sea, I need to say again, how often I think of you, and how, even when not writing this blog, you continue to enrich my life. I want to send many blessing your way, and the energy and bounty of a full and smiling heart.


***In summery: Before I head back to work for another three month stint, I will make another post next Tuesday, January 22.
Posted by anitra at 5:04 PM 26 comments: