Hello Delightful readers and viewers. One post below is my September 15th post on "Anitra Ford's Personal Blog". I have also just made a new post on my other blog, "Anitra's Book of Days." As we can't link it in the text here, you may find it listed when clicking at the bottom of my profile in the sidebar under "About Me", or else, you can Google it and come visit. 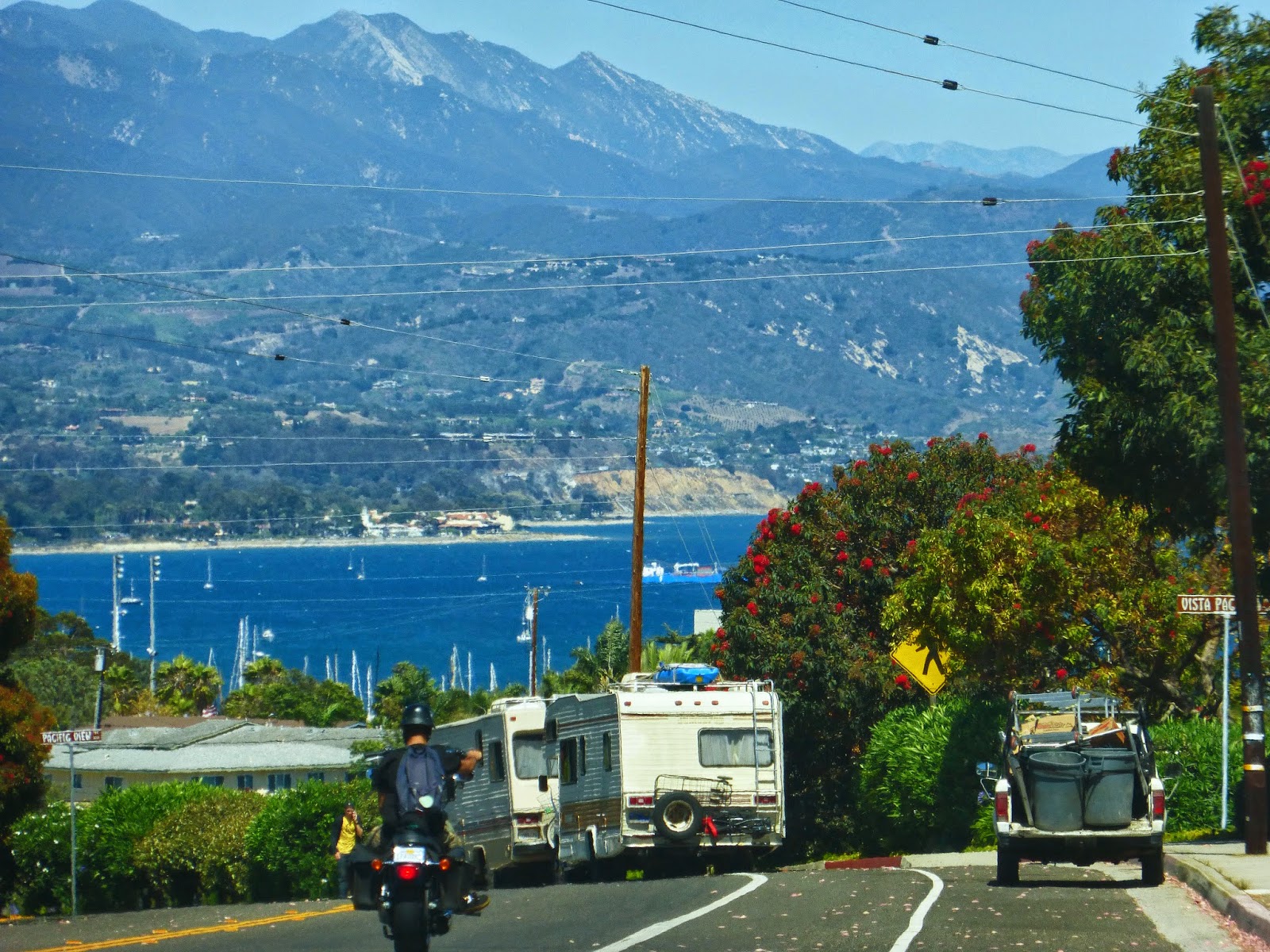 Santa Barbara, I. Magnin, and Passion 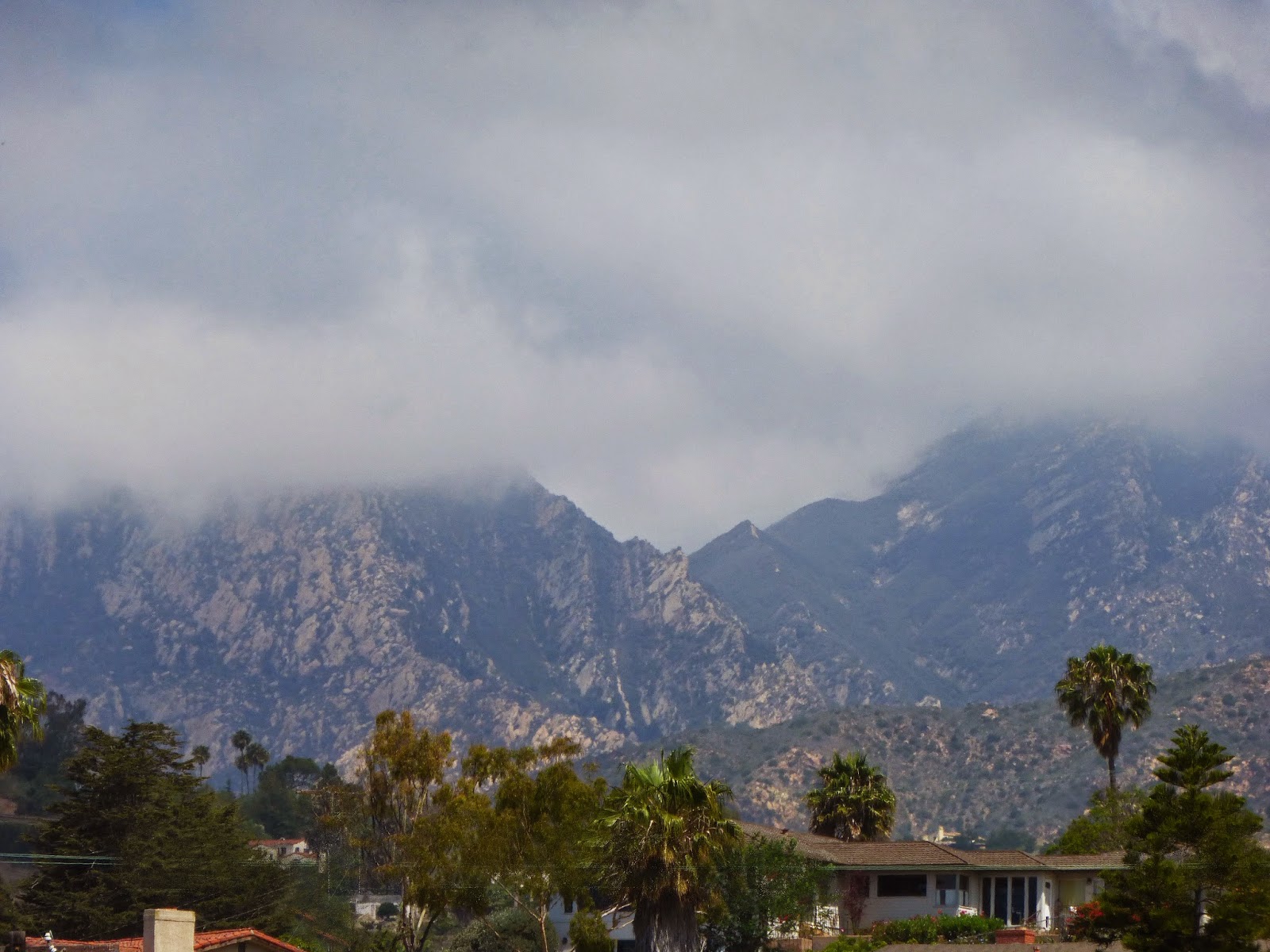 A fog shrouded morning on the coast. Mid-August and we've had fog-hazed days all summer. May, June, July, and now August, filtered through mesh. The mountains, just a mile away, are invisible. Blotted out with the fuzzy cloth of fog. And when the fog thins, you're left with a filter buffering the mountain's typography. The ridges that in November slice clean against the sky, we rarely see in summer.

When I came to visit 35 years ago, I'd been here once before. Shuttled from L.A., and put up in a quaint cottage inn for one night. Five I. Magnin models were brought here for their annual Champagne Fashion Show. We had just performed it in Los Angeles to an invitation only audience. Two-hundred privileged guests, who included the Ronald Reagans, the Robert Stacks, the Charlton Hestons, and other notable celebrities like platinum-maned Maimie Van Doren and the velvet-voiced Johnny Mathis. 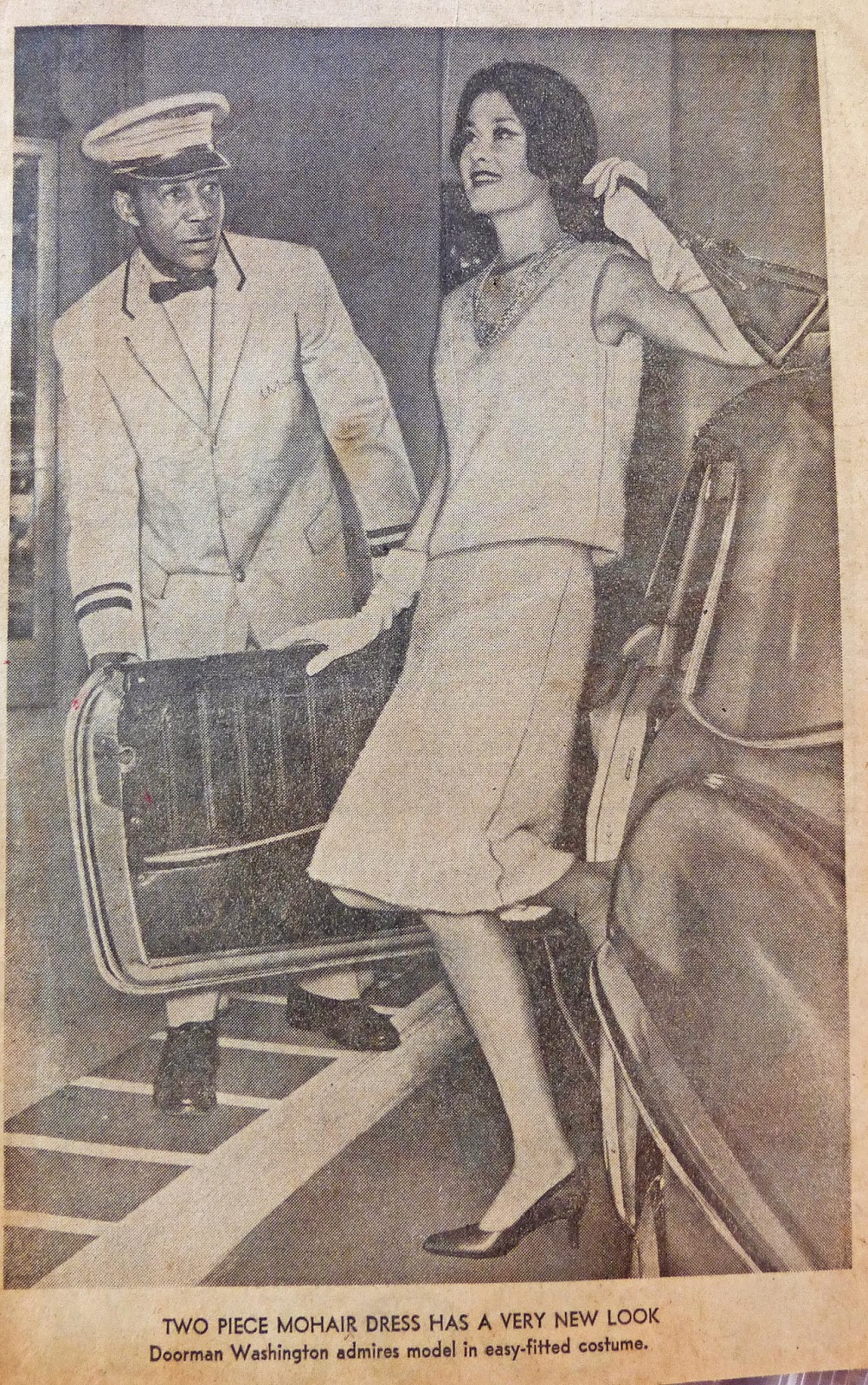 We brought the clothes and the show up the coast. First to Santa Barbara, and then to San Francisco in 1962. I was a "house model" at the store on Wilshre and Vermont, who walked the floor from 9-5 wearing too tight Evan's shoes (supplied by the store.) I strolled the white carpet of the second floor and the beige linoleum of the first, inhaling the dreamy moneyed scent of Eau de Joy. I stopped in front of patrons, smiled and said, "Hello, good day." Then posed, touched the fabric of my garment, and said, "This suit is by Jones of New York. You can find it in the knit department on the third floor." I'd then--in spite of my aching blistered feet--do a full pivot, and if the shopper had no questions, smile and say,"Have a lovely day," and move on. 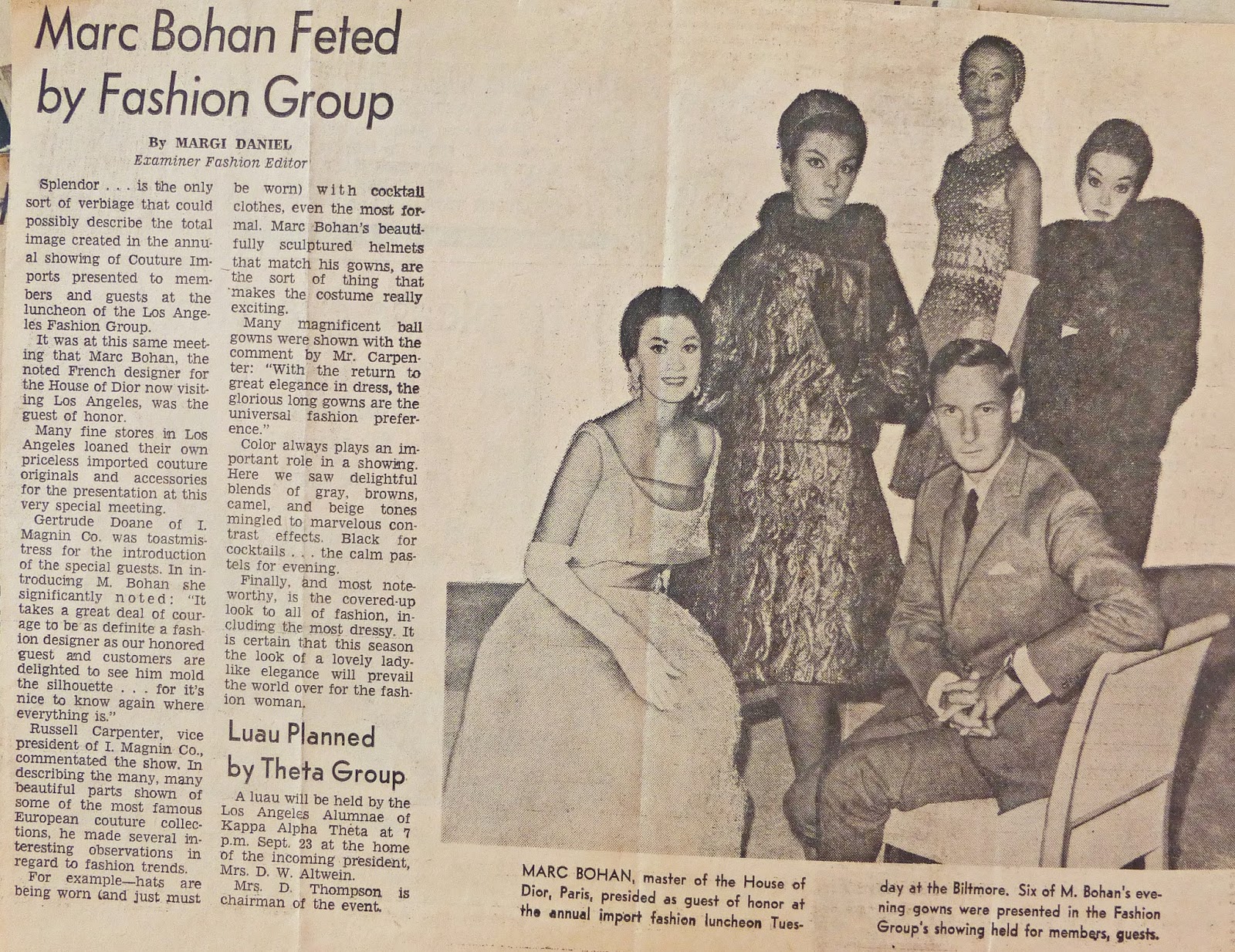 At age nineteen, Santa Barbara was not for me. I had plans, things to do, places to see. I. Magnin was a first rung on the ladder to my future. I was gong to be a great model. I was going to work in New York. And once I got confidence down, solid in my pocket like the four-corned square of a wallet, then I would do what I was meant to do. I could handle it then, that thing I could not, not do. The art that stirred my passions from way before the euphoria of starring in my high school play. 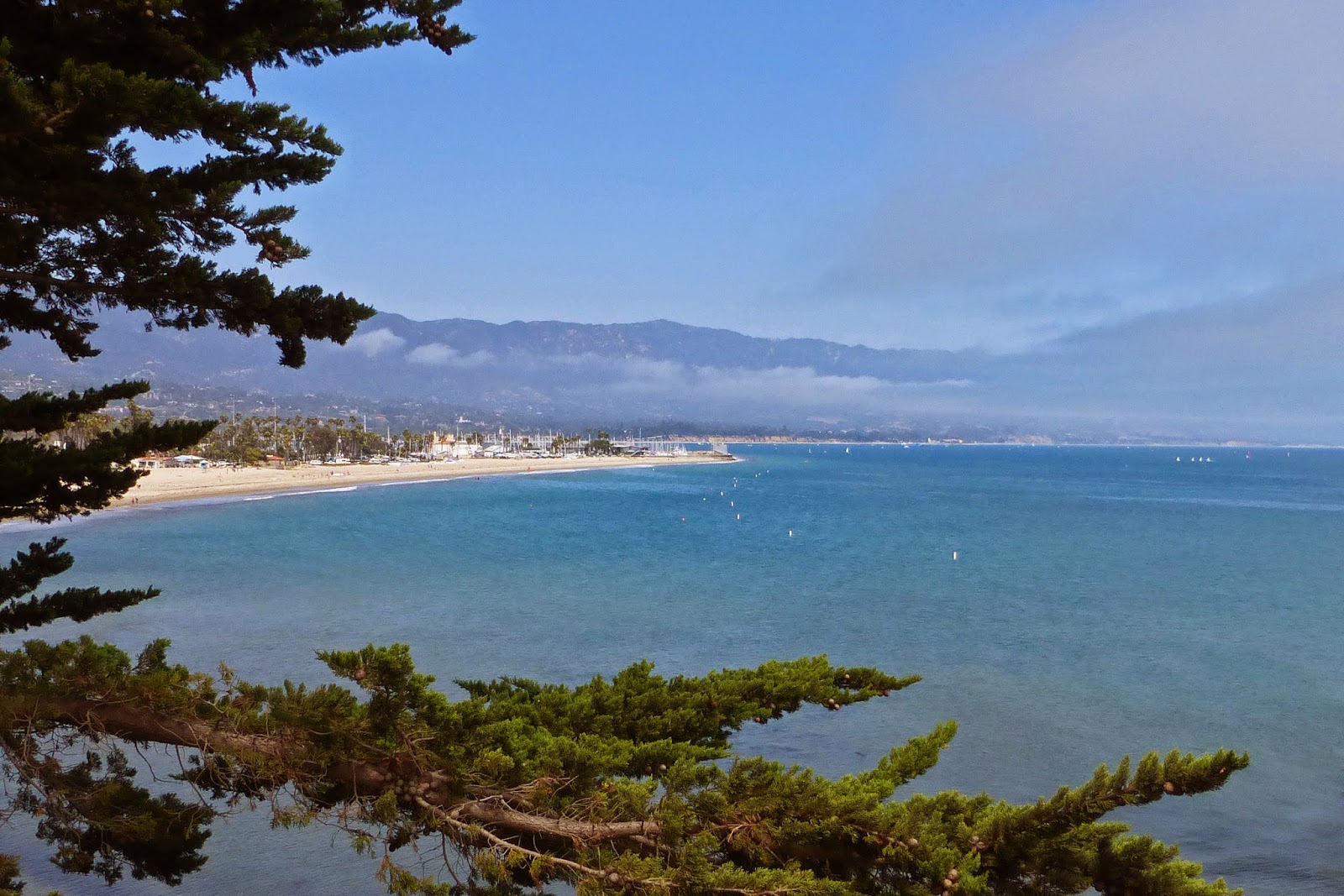 Welcome back Dear Readers. I'd like to mention that the photos above were taken of me by I. Magnin when I worked for the store. After fashion shows, newspaper photographers waited in the wings to take photographs of the designer garments. The fashion coordinator would choose models from the staff to pose  for the newspaper shots. In the photo with Marc Bohan, then the head designer for the "House of Dior" in Paris, I am sitting to his left.

It's great to see you here. I plan to return -- as I have been -- in two months. That will be on November 15th. I am about ready to make a new post on my other blog, "Anitra's Book of Days." I imagine that will be within the next few days. Expressing my warm regards to you all. Be cool and safe,      ~    Aneet