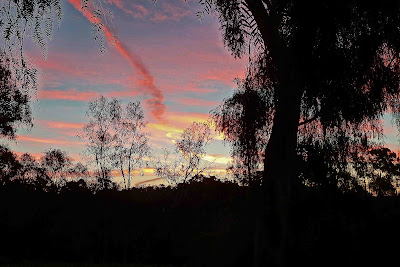 On New Year's Eve day, my mind goes to the image of a drop of water splashing into a pond. It's a classic picture, the kind you would find in a New Age calendar or in an ad for the environment. This image best conveys the way I feel about New Year's Eve.

Two thousand and eleven is standing on our doorstep, and whether we choose to invite it in or not, it will cross the threshold in less than a day.

There are times when I tell myself, "What's all the ruckus? It's just a day! Just another day. If we didn't make such a big deal about it, no one would even notice."

But it's also true, that when I turn on CNN and watch the countdown in Time Square, and the crystal ball begins its descent, something quite extraordinary is set in motion. And when the ball finally touches down at the exact point of midnight, and the crowd cheers, and a blizzard of confetti swirls around the skyscrapers of New York City, and then, Frank Sinatra's inimitable voice begins to sing, "Start spreading the news..." I feel as though I'm standing on a precipace at the edge of time.

My past flutters behind me like maple leaves in the wind, and my future spreads before me like a wide, clear slate. And all at once, it seems the entire world has merged into that one drop of water, splashing. 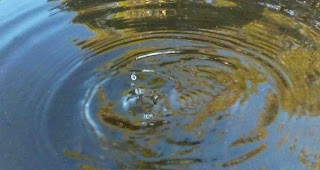 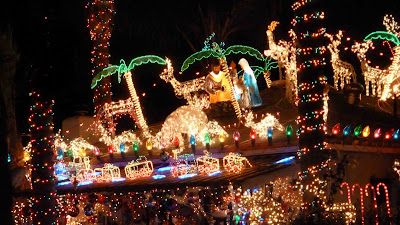 The Nativity Scene on the roof of the wonderful house of lights on Quinientos Street is flanked by palms trees wrapped with spiraling strands of lights.

Have a warm and joyous Christmas to each and every one of you.

Sincerely, Anitra
Posted by anitra at 8:49 AM 8 comments: 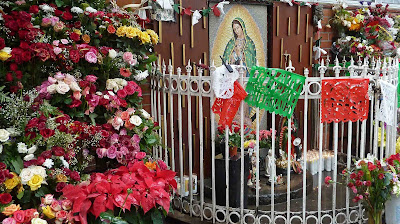 at the Our Lady of Guadalupe Church
Posted by anitra at 10:51 PM No comments: 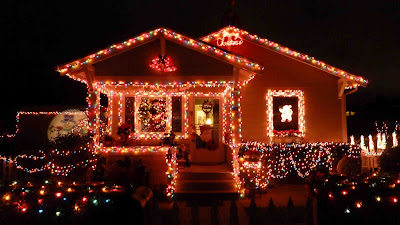 It's not as if every house in Santa Barbara, right now, is glowing with Christmas lights. Most are not. But if you comb the streets, particularly on the Lower East Side, you will find flickering lights and shiny ornaments dangling from eaves, and likely, on a side-street, a saguaro cactus trimmed with blue and green. You might also see letters that spell the word, Noel.

But now and then, you'll come across a standout, a labor of love, where the owner, or maybe even a renter, has transformed a humble home into a light-filled fantasy. And you have to be pretty hard-hearted to look at these creations and not recall the kind of awe you used to feel as a child.

and, just around the corner... 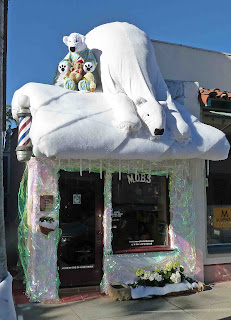 The Members Only barber shop in downtown Santa Barbara, is the tiny box of a store. How surprised I was to discover this whimsical sight on its roof: a gigantic polar bear flopped on his belly, with an artful collection of fuzzy friends.
If you look closely, you can see icicles dangling from the eaves. Translucent wrapping paper of pink and green, attached to the building's facade, and the presence of the old barber's pole, enhance the visual treat.
Posted by anitra at 7:48 AM No comments:

Season's Greetings from the garden 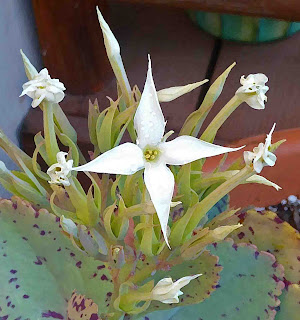 Three nights ago, it rained. The next morning, I noticed that the succulents in the yard had responded. With leaves washed clean, and after a deep, nutritious drink, their colors glowed with iridescent intensity.
And to my surprise, one bud on the kalanchoe plant had opened to reveal a perfect blossom in the shape of a star.
Posted by anitra at 6:52 AM 4 comments: 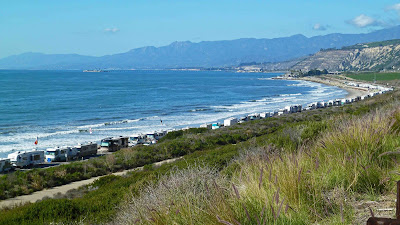 If you drive down the coast from Santa Barbara, along Highway One, to your right, the vast and ever-changing Pacific accompanies you for thirty miles.
Fifteen miles further, you'll reach the steep grade of the Conejo Pass. Once scaled, you then, begin your descent into L.A. -- or as we call it, "The belly of the beast."
On my recent trip, I found clear skies, and, to the east, rare views of the San Bernardino Mountains. This reminded me that in some respects, and especially when clear, Los Angeles has its own beauty.